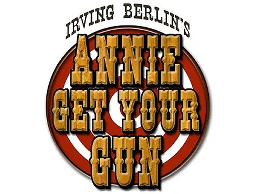 Annie Oakley is the best shot around, and she manages to support her little brother and sisters by selling the game she hunts. When she's discovered by Col. Buffalo Bill, he persuades this novel sharpshooter to join his Wild West Show. It only takes one glance for her to fall head over heels for dashing shooting ace Frank Butler, who headlines the show. She soon eclipses Butler as the main attraction which, while good for business, is bad for romance. Butler hightails it off to join a rival show, his bruised male ego leading the way, but is ultimately pitted against Annie in a final shoot-out. The rousing, sure-fire finale hits the mark every time in a testament to the power of female ingenuity.

This show with its revisions will be mindfully performed in a tasteful way, respecting all peoples. Annie Get Your Gun does have shadows of the reality of its time. It has been carefully rewritten by Peter Stone, and serves as a reminder of how far we've come in breaking down old stigmas and constructs that have divided us in the past. While we cannot erase history, we as a human race can reflect on it and move forward in a beautiful, loving, compassionate and humane way so as not to repeat it.

Annie Oakley - Age Range 20-30 - Mezzo-Soprano: Though illiterate, Annie is intelligent and resourceful. She's a spunky, sassy and determined young backwoods woman based on the historical sharp-shooting Annie Oakley. Although she is boisterous and opinionated with a crude exterior, she is likeable, honest and down-to earth and the forever optimist. Must see her character develop as the story evolves and have good dance skills. She falls for Frank Butler at first sight. Must be comfortable with intimate scenes with Frank and Sitting Bull.

Frank Butler - Age Range 30-40 - Baritone: The handsome star of Buffalo Bill's Wild West Show, Frank Butler is used to being the very best -- until Annie shows up. He is driven crazy by his rivalry with Annie, but eventually falls in love with her. He is confident, suave, stubborn and egocentric and is used to being in control of everything. This character is based on the real-life Frank Butler. He must have a big stage presence, with strong vocals and be able to play bold and strong with vulnerability. The stage relationship with Annie must be believable, so must feel comfortable with intimate scenes with Annie.

Buffalo Bill Cody - Age Range 40-60 - Baritone: A charismatic, larger than life character - a show man! Formerly known as Colonel William F. Cody, the owner and founder of "The Wild West Show" now goes by "Buffalo Bill." He sets up the entire musical by telling the audience that they will now re-enact the story of Annie Oakley and Frank Butler, by creating a play-within-a-play.

Dolly Tate - Age Range 25-40(script says 37!) - Alto: Frank's show-girl assistant on the Wild West Show, Dolly would desperately like to be more than just his assistant. She is slightly passed her prime, and thus is now desperate to find a husband. As such, Dolly is wildly jealous of Annie. She is also quite controlling and protective of her younger sister, Winnie, and forbids her marriage to Tommy Keeler who is part Native American.

Chief Sitting Bull - Age Range 50-70: Chief Sitting Bull, Native-American, Sioux Chief and holy man. He becomes Annie's protector, adopting Annie into the Sioux tribe. Sitting Bull is being courted as a new attraction for Pawnee Bill's rival show, but he ultimately ends up investing money in the Wild West Show out of fondness for Annie. He is a source of wisdom throughout the play - the stillness of him is powerful. A dry sense of humor and very wise businessman.

Foster Wilson - Age Range 50-70: The manager of the Wilson Arms Hotel. Provincial, grumpy, and generally looks out for himself before thinking of anyone else.

Tommy Keeler - Age Range 20-25 - Tenor: Tommy Keeler is a dashing young man with some Native American background who is a knife-thrower in Buffalo Bill's Wild West Show. He is young and ambitious, and terribly smitten with chorus girl Winnie Tate. When her older sister Dolly gets in the way of Tommy's marriage to Winnie, Tommy never gives up. Must be a strong dancer and vocalist.

Winnie Tate - Age Range late teen(script says 17) - Mezzo-Soprano: A chorus girl in the Wild West Show who dances in Tommy's knife-throwing act. The little sister of controlling Dolly Tate, Winnie is young and attractive and hates being treated like a child. She is fun and flirtatious, but she resents it when people don't take her seriously. Winnie marries Tommy Keeler, but their marriage is annulled because she is under 18. Later, they are reunited. Must be a strong dancer and vocalist.

Pawnee Bill - Age Range 40-70: An oilier, less respectable version of his rival, Buffalo Bill. Pawnee Bill used to be Buffalo Bill's partner and is now his rival and primary competition.

Dancers Male/Female - All Ages: This is a fast-moving fun show for choreography and ensemble work, with loads to do for everyone! We will need a strong 'troupe' of dancers (male and female) to lead the company in the big musical numbers.

Ensemble - The ensemble is involved in all the company scenes throughout the show. The troupe of actors/dancers act as crew moving props and set pieces as they set up the next scene to create the "play-within-a-play" feel of this production... therefore the action never stops. Cowboys/Cowgirls - Show Business/Big Top characters - Native American families - Ballroom guests - Crowned Heads/Monarchs of Europe, etc.

Please mark the character(s) for whom you wish to audition and download every file that appears.

Annie Get Your Gun Cancelled

Due to the rising number of cases of Covid-19 and a recent exposure to our cast we, unfortunately, have decided to cancel our upcoming performances of The Game’s Afoot for November 19, 20, & 21, 2020. It is true that we are concerned with attendance numbers but most importantly we are concerned about the health of our cast, crew, and patrons.

At this time we do not have a postponement planned, but with some hope and luck we may be able to bring this show back at another date or in another season. Our current plan is to push forward for our next production of Evita in February. We will be constantly monitoring the situation in our community in order to make informed decisions about each of the remaining shows this season.

We want to say thank you to our cast and crew for their hard work and preparation for the show. We are sad that we cannot present it to you but we know this is the best decision for our community. We love Jefferson City and we want to make sure we are doing what we can to stop the spread of this illness. Thank you to everyone for your continued support of The Little Theatre and the arts in Jefferson City.